The APRLO is WFPHA regional office for Asia Pacific. It coordinates with countries throughout the region to improve and protect publics' health.

From 2009 to 2016, under the leadership of WFPHA and support from member PHAs, we organized 6 regional conferences in China, Japan, Indonesia, Vietnam, Korea and Thailand, focusing on the regional hot issues in the field of public health.

Theme of the first WPRCPH was WPR-Networking: Preparedness for Public Health Challenges. About 50 representatives from China, Australia, Vietnam, Japan, Indonesia and New Zealand attended the conference and delivered speeches around public health challenge in the region.

The 2nd regional conference was held in Tokyo, Japan from October 26 to 27, 2010. Whose theme was Urbanization and Public Health in Asia. On behalf of WPRLO, CPMA Director Wang Peng introduced the TOR details to all participants. ToR of WPRLO got the approval from member countries. 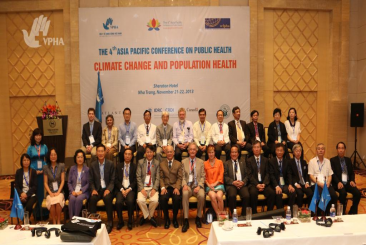 The 4th conference was held in Vietnam in 2013, whose theme was Climate Change and Aging Health. During the conference, VPHA handed over the Asia-Pacific Public Health Conference flag to KPHA at the closing ceremony.

The 5th conference was organized by Korea Public Health Association in May, 2014. The theme of the conference is Health Asia Multidisciplinary Approaches to Emerging Challenges. Around 1,018 registrants from 32 countries presented.

The 6th conference was held in Thailand, August, 2016. The theme of the conference is Sustainable Development of Public Health. Around 400 registrants from 17 countries presented. During the 6th WFPHA Asia-Pacific Conference on Public Health, under approval of WFPHA, a working meeting of the Asia-Pacific Regional Liaison Office was convened as well.

Since the first Asia-Pacific Conference on Public Health was carefully prepared in Beijing in 2009, six conferences have been held in Japan, Indonesia, Vietnam, South Korea, and Thailand respectively. The mechanism of the sequence of APCPH of WFPHA has been increasingly recognized and operated in an orderly manner. The 7th APCPH will be held by Public Health Association of New Zealand in 2022. APRLO will further strengthen academic exchanges among member states, promote friendship among member associations, and contribute to the development of public health in the Asia-Pacific region.
footer